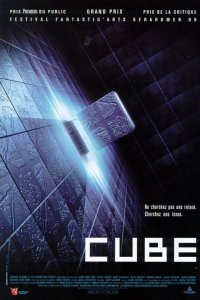 This film about a group of strangers, inexplicably trapped in an interlocking network of connected cubes and their efforts to escape, is gripping from beginning to finish. It also raises some interesting questions.

What if we were trapped in a disciplinary mechanism which has gone way beyond any necessity for Panoptic surveillance and simply relies on the complexity of its own mechanism to keep people in place? Worse, there is no reason for the mechanism, it has simply arisen as the anonymous result of collective labour, each worker producing part of the machine in ignorance of others, until its original purpose – if there ever was one – is lost. The people trapped in the cube are there for no ostensible reason we can see. Perhaps there is still a residual bleak comfort in the notion of the Panoptic society. At least somebody cares enough to want to watch what we are doing, even if only to exercise punitive measures. Nobody (as far as we know from the film) cares what happens to the people who are seemingly placed at random in the cube. It would appear the only reason they are there is simply because the cube exists and something needed to be done with it.

The only person who escapes is the idiot savant who has no purpose, no capacity to wonder why, and whose contribution to his own escape is not willed but simply the result of instinctive action which others have been able to harness even if they themselves do not survive. And to make this grim scenario even darker, as the director’s commentary points out, the people are in far more danger from each other than they are from the deadly but logical workings of the cube.

The film’s intellectual and somewhat abstract approach, gives the viewer enough distance not to be dragged down into a gloomy morass and it works extremely well.

The famous soliloquy from Macbeth is clearly more than a little apposite here.

“Tomorrow and tomorrow and tomorrow,
Creeps in this petty pace from day to day
To the last syllable of recorded time,
And all our yesterdays have lighted fools
The way to dusty death. Out, out, brief candle!
Life’s but a walking shadow, a poor player
That struts and frets his hour upon the stage
And then is heard no more: it is a tale
Told by an idiot, full of sound and fury,
Signifying nothing.”

This site uses Akismet to reduce spam. Learn how your comment data is processed.