I have been trying very hard to like the new millennium Doctor Who, but I think the time has come to admit defeat. I have now reached the tipping point where I have given up hope that the series will  turn into something that I actually enjoy watching. Something that I can watch without constant cringing embarrassment at its maudlin emotional excesses or irritation at its poor narrative construction, moral ambiguities and repeated excursions into dubious religious territory. Then there’s the bombastic and intrusive orchestral score which grates like sandpaper on my musical sensibilities. That’s quite a list unfortunately! As  The Outland Institute has it – a once favourite program has turned into Neighbours in Space: a soap with science fiction fantasy trimmings.

If my parents were avid watchers of Doctor Who, right from the early William Hartnell days (Dr. Who first went to air in the UK in 1963), the Doctors I grew up with were Patrick Troughton and Jon Pertwee. I dropped out mid Tom Baker due to other non-television watching activities, fortunately before that point where his performances and the story lines degenerated into eccentric and twee pantomime and tedious fannish stories about the Doctor’s fellow Time Lords and home planet of Gallifrey. 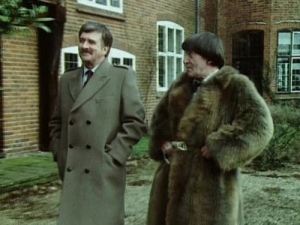 My first memories of Dr. Who were of Patrick Troughton in a shaggy overcoat accompanied by his companions, Victoria and Jamie, battling with mysterious and rather frightening yeti in Tibet who turn out to be robots animated by impressive glass silver spheres. The air of menace in my memories of this story was further enhanced by the constant howl of a  freezing wind in the background, the interaction of the Tibetan monks and the alien intelligence, and the grainy black and white in which the series was filmed. Unfortunately this adventure titled ‘The Abominable Snowmen’ first broadcast in 1967 has been lost – wiped as was a common practice of the day in relation to television series. This was reflective of the low status of television as an art form at the time and, of course, nobody had any idea that the technology for home recording and viewing would exist in the future and that much money could be made from a combination of nostalgia and fan completism.

I am part of a generation – indeed generations – who grew up with Doctor Who and it has no doubt structured the imagination of those generations in ways they cannot even track – and this is perhaps part of the reason for the huge success of the new millennium version of Doctor Who. People want to like it, as it hooks into a cultural imaginary formed by Doctor Who in the past. Parents also want their children to have that experience. Of course, in the 1960s the mere mention of ‘cultural formation’ in relation to something like Doctor Who, more readily defined as genre trash culture for children, would have been anathema. The series creators tried to attenuate this with some educational pretensions – notably the adventures set in various periods of European history. But Patrick Troughton eventually left Doctor Who on the insistence of his wife who thought that acting in this children’s rubbish (furtively watched by many adults as well) was a poor career move. But of course, apart from a small but notable part in The Omen (1976), his three-year stint as Doctor Who from 1966 to 1969 is what he is remembered for today. This disqualification of certain types of imaginative output – namely the speculative imaginary – as suitable for consumption by adults is by no means dead in current culture.

This site uses Akismet to reduce spam. Learn how your comment data is processed.